The ‘lols’ are over.

The now infamous @Michael_Haneke Twitter account has been retired after treating us to months of cinematic hilarity, and the person behind the tomfoolery has disclosed himself as Benjamin Lee, deputy editor for Shortlist. Roasting award shows, yapping about his cat / tequila or simply taking a dig at fellow filmmakers (‘plz RT if u hav also blakd out wiyl watchn a terruns malick film. ppl need 2 speek up and stop suffring in silense lol #teamhaneke’), the fake Haneke account has had the twittersphere leaking from all the laugh-tears since its inception last year. The Guardian even had him write a diary for the Oscars. 31,000 followers strong, it’s a downright shame that this origin of much jocular nonsense has now been switched off, revealing only a disappointingly normal man behind a curtain. It used to be kind of, sort of like this: 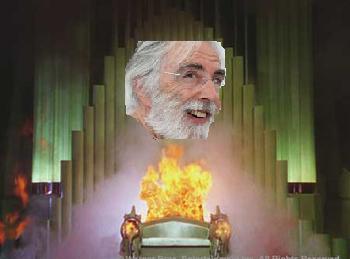 The Wizard of Lolz.

But a deep suspicion rumbles in the deep, one that tickles the part of my brain that wants to be a serious investigative journalist and Columbo at the same time; what if Benjamin Lee had his hand, however politely, forced?

Haneke himself expressed a mild disdain toward the account earlier this year, stating to The Los Angeles Times during the Globes ceremony, ‘I’m not that interested in that kind of thing. It’s not for me’. Well, mild disdain or complete apathy. It’s hard to tell with a man that makes serious movies, and is a rather serious fellow himself; the entire reason the account is so funny in the first place. But not only were Lee’s tweets-by-proxy so grin-inducing because of their ability to tear down the smug structures that bolster celebrity mythos, award shows and other excesses that Hollywood lavish upon its flock; @Michael_Haneke knew his films too. Nonetheless, I can imagine Lee had recently received a letter asking him to cease and desist, from someone involved in the Haneke estate. Nothing serious like a subpoena, mind; merely an understated, probably polite acknowledgement of Lee’s well-meaning rib-nudging, but that it was time for him to stop, lest a defamation case be brought against him.

Not that Lee’s exit was quiet; in a rather depressing fashion, Lee stepped through that Haneke-emblazoned curtain to what I expect he assumed to be applause waiting for him. ‘Tonight Matthew, I’m going to be a bit of a cock.’ It was kind of, sort of like this: 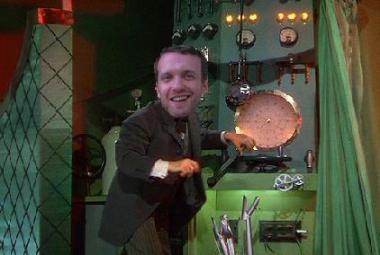 Benjamin Lee: ‘Don’t mind the man behind the – wait, I mean LOOK AT ME!’

The final gasps of @Michael_Haneke were news-tweets from The Hollywood Reporter and The New York Times, articles declaring Haneke’s werewolf-like metamorphosis into Lee. My Columbo senses are tingling; has he done this to boost his readership? And if so, why now? Well, Columbo doesn’t find answers, he hunts them down. (I’ve never seen the TV show, by the way.)

It’s safe to assume that there was no motive behind starting the account up. Lee clearly has a love for the man’s work, and a knack for tickling the funny bone of niche subjects. He told the Guardian, ‘It was done out of total respect and admiration for Haneke and his films’ – this I don’t doubt at all. But it’ll be interesting to watch the number of his Twitter followers in the days after Hanekebot has been laid to rest – though as bloody exciting as that sounds, the real thing to keep an eye on is his output. I’m seeing interviews, I’m seeing a book deal – My Lyfe as Haneke lol – I’m seeing handshakes in dark places. This is all mere conjecture; but something doesn’t ring quite right, does it? Perhaps I’m being overly critical. In applying realism to stories such as the fake Haneke account, it can turn into full-blown cynicism – but at the cost of the truth, no matter how relatively unimportant the capital T is in this particular situation, it’s a risk I’m willing to take.

Haneke the man: a great director of our times. Haneke the hologram: some kind of anarchic messiah, sent from cyberspace to help us see the ridiculousness inherent in the system? Nah – though he was a respite from it, gently tugging at the right strings to pop smiles. As much as it would be preposterous to consider that Lee should be proud of his small, amusing and bizarre effect on lovers of cinema who don’t mind having the community poked at for laughs, it was still amusing while it lasted – and whatever the circumstance in his mysterious departure from Twitter and revealing himself, he’s killed a little, but considerable, bit of magic. All this bluster for a fake Twitter account may be symptoms of a mental illness I’m forming – I’d probably go with schizophrenia, personally – but there is always something lurking under the surface that deserves to be pulled out. I hope Benjamin Lee doesn’t riff off the success of his Austrian online persona in the future. If anything, I’d want him to return to it; I’m willing to believe in the Wizard as long as he stays behind the curtain, sticking to the same set of values that incurred him to create it initially. #teamhaneke.

To end, my personal favourite tweet of @Michael_Haneke’s, tweeted during the Golden Globes ceremony this year:

‘i think u made mistayk with the tables. i askd 2 b sat nearest the door so i cud watch 4 wen my dominos arrives lol’