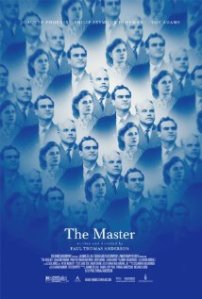 Once every few years, the film world is gifted with something that is almost unanimously adored: the latest Paul Thomas Anderson film. Ever since his true critical breakthrough with Boogie Nights (not to sideline his debut Hard Eight, of course), each successive film has raised the boil on praise levels, and with it the amount of hype has suitably been on the increase; each directorial effort has seen the forty two-year old gradually and carefully dispense with more typical tropes and styles, which ultimately led to 2007’s There Will Be Blood. Touted as a masterpiece on its release, it remains a work of brutal, challenging art from a now fully-fledged auteur – but what’s next? One of the best movies of 2012, it appears.

Or The Scientology Movie, as it’s otherwise known. At least, that’s what the majority of the public have been labeling it: inspired in part by L. Ron Hubbard’s creation and expansion of that particular cult movement (which in itself is a glorified form of Mormonism), The Master is so much more than that. At its core is the relationship between two men; Lancaster Dodd (Philip Seymour Hoffman) and Freddie Quell (Joaquin Phoenix) meet on a boat on the day of the former’s daughter’s wedding (echoes of The Godfather’s inclination toward controlling personalities, anyone?), and wax honestly about Freddie’s life. What led him there. The choices he’s made. Whether his post-WWII life fulfill him. The Cause, Dodd’s group of followers, promote the betterment of the human condition via questionable methodology: members are made to go ‘Back Beyond’, to discover previous lives they have lived. This is pointed out by one cynic early on as hypnosis, and ‘the basis of a cult’ – but that’s the first and last we hear of the C-word. It’s not The Scientology Movie; it’s an intense study of the entrapment of one man by another, a twisted yet touching surrogate father-son dynamic, and works as the beating heart of The Master.

One of the strongest factors in Anderson’s work is that he writes his movies entirely for his characters; the barest narrative kinesis apparent in The Master is there to purely serve the advancement of Freddie’s fubar persona and Dodd’s quiet megalomania – and what characters they are for it. Pheonix’s Freddie is in a constant stasis of haunched-over, chip-on-shoulder cragginess, forever searching for some drop of meaning in the beautiful blue waves that bear him from country to country, from indifference to more indifference. While Phoenix will likely garner Best Actor nominations for his honest, physical portrayal of this tormented man, it’s Seymour Hoffman’s Lancaster Dodd who is truly an incredible creation; his presence in a room is all at once comforting, silently menacing, but above all controlling. The way he puppeteers Freddie with no visible strings, manipulating not just the mind with his new-age hypnosis techniques, but the soul, is undeniably affecting and believable. The greatest achievement of both Seymour Hoffman’s acting and Thomas Anderson’s writing, however, is the success in keeping the inner workings of this hopelessly inquisitive man as secret as the recipe for one of Freddie’s alcoholic ‘potions’; is he doing all this for real, because he truly believes in it? Or is he doing it for personal gain? A few cracks appear along the way, suggesting the latter – the laundering of money. A slight change in ideology in his new book. Either way, he loves his adoring wife – a well-used Amy Adams in a crucial role, which she pulls off fantistically – and what he does believe in is Freddie.

This merely scratches the surface of the psychological and sociological depths The Master plunders. Its
enigmatic nuances, brave choices in direction and writing, and pervading sense of mystifying dread all open doors on motivations and desires. Masterfully constructed montages on a level with Terrence Malick’s get the heart pumping and above all, the brain ticking. Along with this, on a technical level this is the most beautifully-shot film released this year aside Anna Karenina  – yet instead of flashiness, it opts for camerawork that goes unnoticed in its restraint, but still invents images that linger in the mind long after.

Joaquin Phoenix has recently said the Oscars are ‘total, utter bullshit’, yet he and Hoffman will undoubtedly get Best Actor and Best Supporting nods their way for their astonishing work. For a piece of cinema that actually strives for – and mainly succeeds in – semantic achievement on every level, a mere award means nothing. It’s a Serious Film for Serious Film Fans, but it never once is patronising. It leads it audience into a world where, if they’re willing, they can find things out for themselves, and repeat viewings will probably induce a greater understanding – and probably enjoyment – of this erudite and infectious colossus. Is it better than There Will Be Blood? In time, it may be. But it’s pointless to compare his films; each one means so much and in so many different ways. If Lancaster Dodd’s sessions with his disciples may technically be hypnosis, they still come out in waves of euphoria, equipped with a new way of seeing the world. One viewing of The Master will do the same trick. Will you join him?