Why the Oscars and all other award shows are wrong. 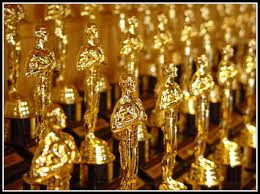 So, tonight is the night.

Looming like a large shadow over the western world, the Oscars represent the most important night in film – to win one of the little gold men signifies a peak, the absolute summit of your powers as a maker of movies. The world will love you forever. Well, I’ve got news if you’re a subscriber to the high drama of this occasion; the Oscars mean fuck all.

What needs to be primarily understood is the difference between artistic merit and commercial gain. If your celluloid baby is showered with gongs, then every door in Hollywood will open up for you quicker than a whore’s legs. Realistically, you’d be over the moon to win one; financial viability, fantastic publicity, and above all else, appreciation from your peers. Right?

A very recent survey discovered that 60% of Oscar voters – the members of the Academy – are white, male and ages sixty or over. Now, that doesn’t appear to be the most varied constitution of voters, does it? This explains why films such as Drive, one of the most critically acclaimed of last year, didn’t make the cut for Best Picture or Best Director nominations. A movie so stylised and arthouse-oriented could never compete next to the ‘Oscar bait’ tenor of Extremely Loud & Incredibly Close. On Rotten Tomatoes, the former holds a 93% ‘fresh’ rating while the latter is ‘rotten’ at 47%. Even after the math, Drive never had a chance. And neither did Michael Fassbender, really – in an even more surprising turn of events, his unflinchingly open turn in Shame was the talk of tinsel town. However, no nods for the rising Irish star. It conveys the state that the Oscars are in right now; so, if there’s nothing particularly interesting about the awards, why should you bother watching?

But it goes deeper than all this petty finger-pointing. Much, much deeper. At the heart of it, the problem lies in each one of us – we put such high stakes on a simple gold statuette, that we lose sight of our own opinion. But, six thousand Academy members voted that this was the best cinematography, and this was the best supporting performance… No. That is still their opinion, and their opinion only, six thousand or not. Do you watch films to appease others’ tastes? Hopefully, you do not. Hopefully, you watch the films you watch because you love them. Fuck what anyone else says. Let the industry circle-jerk take place; don’t let the nominations or, indeed, the results get to you. For an awards show that supposedly hails technological achievements yet ignores groundbreaking work in the field of performance capture (Andy Serkis loses out for yet another year), you’re better off with your own conceptions of what makes a good film.

And this doesn’t simply relate to just the Oscars. The Baftas, the DGAs, every last one of them – film-related or otherwise (especially when it comes to music, either the glitz-obsessed Grammys or the tedious Brits). While these other film award shows possess a substantially larger credibility than the Kodak Theatre-headed monster, the point remains: like stuff because you like stuff, not because someone else says so. Even use the same logic against this post: ‘fuck this post about the Oscars, I’ll still watch it and enjoy it’. The forever-important idea is to just think for yourself.

Sorry to have deflated your evening.